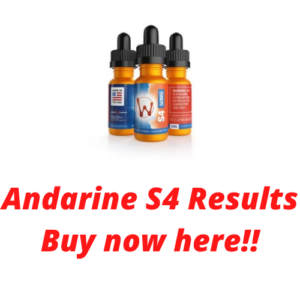 In this blog, we ask the question of what do Andarine S4 results confirm in research to date? The answer is Andarine or S4 is an orally available, non-steroidal SARM developed by the pharmaceutical company GTx Inc. Classed as a research SARM and still being tested we look at what has been discovered by scientists about this interesting research chemical. We also look at where you can find Andarine S4 for sale online!

How does Andarine S4 Work?

Frequently SARM Ostarine is compared to S4 because of similar properties. Scientists found that S4 has a tissue-specific effect. It stimulates the anabolic organs (muscles, bones, etc.) more than the androgenic organs (prostate, testicles, etc.). S4 does not seem to significantly inhibit the body’s production of luteinizing hormone (LH) and follicle-stimulating hormone (FSH). In addition, it does not seem to increase estrogen synthesis either. This suggests that S4 can increase muscle and bone mass without significantly affecting the prostate or the body’s own hormonal axis.

Unlike Ostarine, however, Andarine only binds to the testosterone receptor about 33 percent as strong as testosterone itself. In contrast, the aforementioned SARM can bind even more strongly than the natural male sex hormone itself. Nevertheless, animal experiments show that S4 has similar anabolic effects to low doses of testosterone. In neutered rats, it was demonstrated that three milligrams per kilogram of body weight can build muscle mass and strength very effectively.

These studies relate, among other things, to castrated animals that we’re able to gain significantly more muscle mass and strength through treatment with S4 than animals that received DHT or a placebo. Transferring these results to people, in theory, would mean that Andarine primarily helps against age-related loss of muscle mass and strength, but also inhibits muscle breakdown in injured athletes or AAS users in the period between two cures.

However, among strength athletes and bodybuilders, S4 is mainly used in phases of fat loss. The SARM can inhibit the activity of lipoprotein lipase (LPL), an enzyme that is necessary to store fat in the tissue. Users also report that using Andarine can help them build muscle mass and less subcutaneous water retention. Based on this knowledge and experience reports, S4 seems to be a suitable SARM to lose more fat in a diet phase, to look drier, and to reduce muscle loss or possibly build muscle mass.

However, S4 seems to have two salient side effects. With a dosage of over 50 milligrams per day, the body’s own testosterone production can be inhibited. Furthermore, there may be visual disturbances, which are expressed in night blindness and or yellowish shimmer in the eyesight. However, both effects are only temporary and decrease after S4 is discontinued. According to experience reports, changes in vision only occur at night or in the early morning and disappear quite quickly after getting up. You could compare this to wearing yellow-tinted sunglasses.

Side effects of S4

Example of Intake and Dosage For men:

25 to 50 milligrams, divided into three to four doses for four to ten weeks. Due to the short Andarine half-life of 2.6 to 5.3 hours. S4 should be spread over several intakes throughout the day, for example in the morning, before training, and in the evening. To reduce the side effects of eyesight, it is recommended to use a 5/2 ratio. Take the substance five days a week, followed by a two-day break.

Researchers who administered 120 female ovary rats (an animal model for postmenopausal women who produce less estrogen and testosterone) over four months for either DHT or S4 found that SARM increases bone mass, reduces fat mass, maintains basal metabolism, and maintains the mass of the outer layer of bone better than the testosterone derivative.

Compared to the placebo group, the castrated rats even returned to the body composition of normal animals. These effects were also found in male rats. It can, therefore, be assumed that Andarine inhibits the risk of broken bones, especially in postmenopausal women. The reason for this is not only the change in bone metabolism but also the strengthening of muscle strength, which leads to fewer falls and better protection of the bones. Reduced risk of broken bones can also be beneficial for martial artists.

In contrast to Ostarine, Andarine or S4 should have comparable anabolic effects with less water retention. It also inhibits the enzyme lipoprotein lipase, which can improve fat loss. Due to the lower binding affinity to the androgen receptor, a somewhat higher dosage is necessary, which not only increases the price, but also the risk of side effects. According to experience reports in large quantities, the view may temporarily turn yellowish. However, taking the specified duration of intake into account, this is usually reversible. Nevertheless, trading, owning, and consuming SARMs in the USA is illegal. SARMs are for research purposes only!!

If you are in the medical research industry find a trusted source with Andarine S4 for Sale such as SARMs Warehouse!