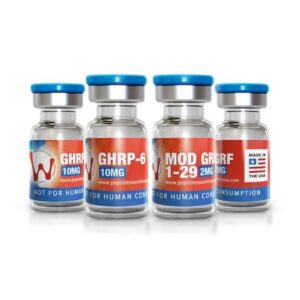 The saturation dose in most GHRP studies (GHRP-6, GHRP-2, Ipamorelin, and Hexarelin) is defined as 100 mcg or 1 mcg/kg.

What this means is that 100mcg will fully saturate the receptors, but if another 100mcg is added to that dose only 50% of that portion will be effective. If you add an additional 100mcg to the dose, only 25% will be effective. Maybe a final amount of 100mcg could add something for GH release, but that’s about it.

So 100mcg is the saturation dose and you could add more than 300 to 400mcg and get a little more effect.

Additional problems are desensitization and cortisol/prolactin side effects.

Ipamorelin is almost as effective as GHRP-6 Dosage in releasing GH but even at higher doses (above 100 mcg), it does not create prolactin or cortisol changes.

GHRP-6 at its saturation dose (100mcg) doesn’t actually increase prolactin and cortisol, but it will be able to do a bit at higher doses. This increase is still within the normal range.

GHRP-2 is more effective than GHRP-6 Dosage in causing GH release, but at saturation doses or higher doses it can produce a mild to moderate increase in prolactin and cortisol. This increase is still within the normal range, although doses of 200-400 mcg could increase to the extreme end of the normal range.

Hexarelin for some is the most effective, otherwise, it is equipotent or slightly less efficient than GHRP-2 in causing an increase in GH release. However, it has the greatest potential to increase cortisol and prolactin as well. This increase will occur even at the saturation dose of 100 mcg. This increase will reach levels higher than what is defined as normal. For this reason, Hexarlin is not recommended since we have Ipamorelin, GHRP-2 and GHRP-6 that in saturation doses do not considerably raise prolactin and cortisol.

GHRP-6 can be used at saturation doses (100 mcg) three or four times a day without risk of desensitization.

Should desensitization ever occur in any of these GHRPs, simply stopping use for several days will remedy this effect.

Chronic use of GHRP-2 at 100 mcg dosed several times a day every day will not cause pituitary problems, no significant prolactin or cortisol problems, or sensitivity.

Sermorelin, GHRH (1-44), and GRF (1-29) are all basically GHRH and have a short plasma life due to the rapid cleavage between the second and third amino acids. This is not a concern, naturally, because this hormone is secreted by the hypothalamus and travels a short distance to the underlying anterior pituitary and is not really subject to enzymatic cleavage. The release of the hypothalamus and the attachment of somatotrophs (pituitary cells) occurs rapidly.

However, when injected into the body, it must circulate earlier, thus finding its way to the pituitary and in less than 3 minutes it is already being degraded.

That is why the GHRH in the above forms must be highly dosed to achieve an effect and for the same reason they are not recommended. GHRH analogs are the solution:

All GHRH analogs exchange alanine at the second position for D-alanine which makes the peptide resistant to rapid cleavage at that position. This means that the analogs will be most effective when injected in the smallest dosage.

The tetra analog or the 4 substituted GRF (1-29) sometimes called CJC without the DAC or named MOD GRF (1-29) , have other amino acid modifications. They are; glutamine (Gln or Q) at position 8, alanine (Ala or A) at position 15, and leucine (Leu or L) at position 27.

Alanine in the eighth position improves bioavailability but the other two amino acid substitutions are made to improve the manufacturing process (ie, create manufacturing stability).

For “in vivo” use, in humans, the GHRH analog known as CJC without DAC or tetra (4) substituted GRF (1-29) or MOD GRF (1-29) is a highly effective peptide with a long life average of more than 30 minutes.

That is long enough to be completely effective.

The saturation dose is also defined as 100 mcg.

Problem with the use of any GHRH (Only use of GHRH)

The problem with using a GHRH is that even the strongest analogs are only very effective when somatostatin is low (GH hormone inhibition). So if unfortunately, it is to be administered in the lowest point phase (or when a GH pulse is not naturally occurring) very little GH release will be added. However, if luckily given during a GH surge or pulse wave (somatostatin will not be active at this time) it will add to GH release.

The solution is simple and highly effective. When a GHRH analog is administered with GHRP. GHRP-6 Dosage creates a GH pulse. It does so through various mechanisms. One mechanism is the reduction of the release of somatostatin from the hypothalamus, another is a reduction of the influence of somatostatin in the pituitary, another mechanism increases the release of GHRH from the brain and finally, GHRP acts on the same pituitary cells (somatotrophs ) as GHRHs do, but this one uses a different mechanism to increase cAMP formation that will do so even more by causing the release of GH from somatotropic stores.

GHRH also has a form of mutual strengthening with the action of GHRPs.

The result is a synergistic GH release.

A robust protocol would be to use a pre-bed GHRP + GHRH analog (to support the nocturnal pulse) once or twice during the day.

For anti-aging and restful deep sleep, an evening dosage is all you need. For an adult, over 40 years of age it is sufficient to restore youthful GH levels.

However, for bodybuilding or fat loss, or injury repair, multiple dosages can be very effective.

The GHRH analog can be used at 100mcg and as high as you like with no problem.

GHRP-2 can always be used at 100 mcg without problems, but a 200 mcg dose will probably be very good.

Again desensitization is something to consider with the highest doses of GHRP-2 and all doses of Hexarelin.

This can be dosed several times a day to be highly effective.

A robust approach that is a bit more conservative: 100 mcg of GHRP-2 + 100 mcg of a GHRH analog either dosed once, twice, three or four times a day.

When the dose is being administered multiple times a day, there should be at least 3 hours of separation between administrations.

The difference is that a pre-bed dosage will give you a restorative amount of youthful GH, while multiple doses or higher levels will produce higher levels of GH and IGF-1; When combined with diet and exercise, this will result in muscle gain and fat loss. According to many studies, the use of GHRH + GHRP is a combination with more favorable effects than the injection of synthetic growth hormone. It is also well to note that the use of peptides such as MOD GRF 1-29 together with a GHRP is more economical and effective than the use of exogenous growth hormone (somatropin).

The administration should ideally be done in both cases on an empty stomach or with only protein in the stomach. Fat and carbohydrates delay the release of GH. So you have to administer the peptides and wait about 20 minutes (not more than 30, but not less than 15 minutes) to eat. By that time the GH pulse has reached its highest peak and you can eat whatever you want.